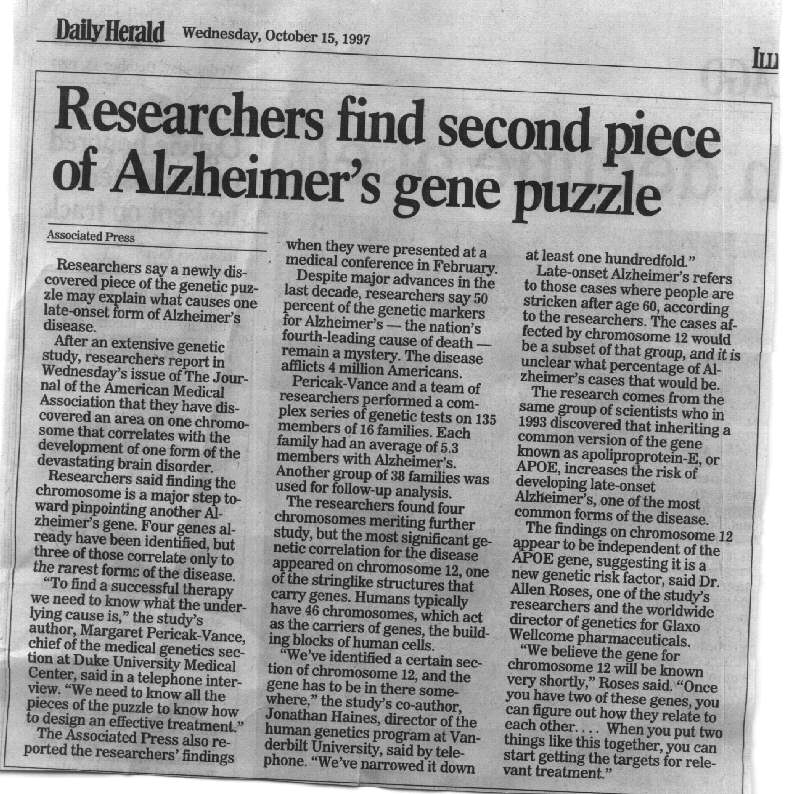 There was some very interesting information in the Glaxo Wellcome pharmaceuticals advertisement, er, AP news article, that was in today's Daily Herald under the headline RESEARCHERS FIND SECOND PIECE OF ALZHEIMER'S GENE PUZZLE.

This is the problem you news folks can get into when you use the pharmaceutical companies information, through the AMA, as a sole source of "reliable" information. I take it from your article that medical research is "hot" on a trail of a gene that causes Alzheimer's disease. The medical profession is told that Alzheimer's disease is a genetic disorder. In other words, a priori, medicine assumes there must be a gene, and is looking for it. From your article, most people are subtly brainwashed that this must be true, because science is finding pieces of a difficult puzzle.

There is just one problem, as pointed out by nutrition lecturer Joel Wallach, a former veterinarian. Wallach claims that a condition similar to Alzheimer's can be induced in animal experiments by cutting back on cholesterol in the animal's diet. It seems the cholesterol is an essential metabolite used by virtually every cell of the body. It is required to manufacture the steroid hormones, such as testosterone, as well as vitamin D. It is also part of the myelin sheaf that surrounds our nerve cells and may make up to 75% of the brain, by weight. Wallach claims that Alzheimer's was unknown in humans 40 years ago, and the condition is not in any human medical textbook prior to 1979. (That claim should be easy to verify.)

So what causes Alzheimer's disease today in humans, according to Wallach? He blames the American/world obsession with lowering cholesterol.

This company would not attempt, I'm sure, to divert attention from the dangers of its product by encouraging the notion that Alzheimer's disease is genetic, now would it?

What I found fascinating about the article, something I didn't know, is that an ordinary blood lipid -- apo(E) -- is known to be involved. Medicine is looking for an "apo(E) gene"!? Wallach is confirmed; even medicine knows that cholesterol is involved with Alzheimers!

Now, it may well turn out that those who don't make enough apo(E) on their own, when they lower their cholesterol, are the ones most susceptible to the disorder. But Wallach's simple solution -- eat more cholesterol -- shouldn't be ignored. How many readers of your article will realize this?

My only point is that when you give access to the news to the "powerful" -- the news they give you is going to protect their vested interests, one way or another. Why not make them at least pay for this access?